Eviction is a way of life for poor renters according to Matthew Desmond, associate professor of sociology and social studies at Harvard. His newly released book, “Evicted: Poverty and Profit in the American City” introduces us to low-income renters in the city of Milwaukee, a typical mid-sized metropolitan area, as he follows their daily life experiences and documents the trauma of eviction from their homes.  His findings shed light on a rarely-chronicled process that impacts the lives of millions of Americans who struggle each month to pay their rent.

Part of the national buzz this book has received is reflected in the unique way that Mr. Desmond chose to conduct his research. In 2008 he moved into a Milwaukee trailer park community to live among poor renters and document their stories over an extended period of time. As a result, Evicted captures the poignancy and devastation that an eviction and loss of stable, secure housing have on these families’ lives. 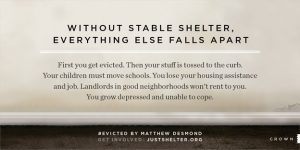 Extent of the Problem

We learn that 1 in 8 poor renter families nationwide are unable to pay all of their rent and expect eviction soon; and 1 in 4 renter families spend 70% of their earnings on rent and electricity. These statistics confirm the reality that millions of families are one paycheck away from losing their homes, giving greater urgency to the need for supportive services that can intervene early on and prevent an eviction to avoid homelessness.

‘Rich’ and ‘Poor’ in the Eviction Process

Examining the dynamics of the eviction process, and the relationship between ‘rich’ and ‘poor,’ the author states:

In this context, ‘rich people’ refers to private sector landlords who have discovered that there is money to be made off the plight of those who are poor. This has led tenants rights advocates in some cities to support increased funding for legal aid in the hope that informed representation can enforce legitimate tenant rights and stave off a percentage of evictions. 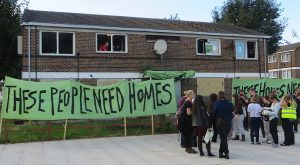 What happens in the aftermath of an eviction?

Clearly, banning evictions or imposing permanent, mandatory rent caps are not viable policy solutions. But adopting policies that promote the production of affordable housing is doable. Both the creation of the National Housing Trust Fund, a more thoughtful and robust voucher program, and recent housing policy proposals by presidential candidates Hillary Clinton and Bernie Sanders point to the need for the return of a more active role by the federal government on this issue.

In the end, Mr. Desmond says:

Webinar with the Author

If you would like to participate in an online discussion with Matthew Desmond, Policy Link is hosting a webinar with the author and housing advocates on May 18 to discuss his book and the national crisis of rising rents and evictions. You can register for the upcoming webinar here.