There’s a lot of anxiety and concern over the Trump administration’s proposal for the FY2018 federal budget. The HUD budget alone anticipates a 13% reductions in funds – a loss of $6.2 billion compared to FY2016 levels. These cuts would devastate low-income households, seniors and persons with disabilities, and eliminate entire programs critical to localities to address housing and community development needs. And pressure will certainly increase on states and local jurisdictions to fill the gaps for human service and housing programs.

With growing suburban poverty and the alarming loss of affordable housing in our region, how are jurisdictions in Northern Virginia responding to this new reality? In addition to preserving their local housing trust funds in annual budget deliberations, forward thinking localities are reviewing their land use policies to see if these regulatory tools can be leveraged to expand housing for low-income – and increasingly moderate-income – households. Staff in housing departments are also monitoring the Qualified Allocation Plan (QAP) that guides scoring for the very competitive Low Income Housing Tax Credits (LIHTC) to see how alignment of their policies and resources with any changes to state housing priorities can maximize the opportunity to leverage local dollars. The annual application process for tax credits in Virginia is so oversubscribed that the difference of 10-12 points in the scoring among applicants can determine whether or not a project is awarded credits.

This increased focus on strategically employing land use policies is giving some jurisdictions in NoVA a competitive edge, so let’s take a look at how they are being used.

Local Housing Trust Funds and Rental Subsidies. Few development proposals in NoVA are awarded tax credits without the inclusion of local public funding. This is the critical gap financing provided as a soft second loan (not a grant) to make the project economically viable. Loan repayments revolve back into the trust fund to support future housing development.

Points are earned when a project can show their jurisdiction’s financial participation in the development – skin in the game. Also, those jurisdictions that provide a rental subsidy for a percentage of the units to serve families earning less than 60% of the area median income, secure additional points for the development in their tax credit scoring. Alexandria Housing Development Corporation’s Carpenter’s Shelter in Alexandria benefited from these strategies, as did Wesley Housing’s The Fallstead at Lewinsville Center and Arlington Partnership for Affordable Housing’s Arlington Mill Residences. 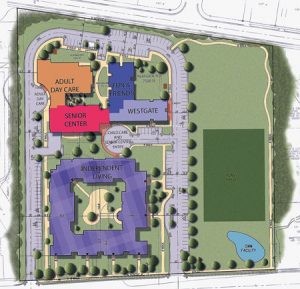 Co-locating Housing with Public Facilities. Resourceful jurisdictions are looking at their inventory of public land to determine if there is an opportunity to include residential development. While vacant land is at a premium, especially in the inner suburbs, co-locating affordable housing development with public facilities is a strategy being used more frequently.

When a developer partner can work with a locality to build housing on the same parcel as a fire station, community center, school or library, costs are dramatically reduced. In most instances, the local jurisdiction provides a long-term ground lease for a nominal fee to retain ownership of the land. As with any other proposal, the project must go through the site plan and approval process. Partnership with the local government doesn’t provide any shortcuts in that regard, but it does provide a valuable asset in greatly reduced land costs. The Residences at the Government Center, Arlington Mill Residences, The Fallstead at Lewinsville Center, and the Station at Potomac Yards in Alexandria are examples of housing developed on publicly-owned land and co-located with public facilities. 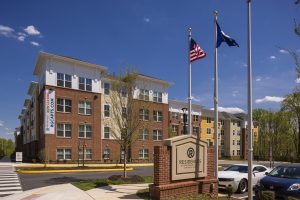 Right-sized Parking. Smart growth principles support more intense mixed-use development near transit centers, and walkability has become a more desirable feature in our communities. With the trends pointing to greater acceptance of mass transit, walking and biking, local governments are re-thinking parking requirements. Most urban development requires underground parking for a multi-family building which can cost as much as $50,000 per space.

In an effort to reduce costs for affordable housing development, the City of Alexandria adopted new parking standards that establish lower ratios when particular conditions are met. These new standards were part of a broader effort to evaluate parking for multiple types of development in the City. Reduced parking ratios consider proximity to a metro station or major bus route, a favorable walkability score, units with restricted incomes, or a designated percentage of studio units in a development. The City’s study of parking utilization at multi-family affordable housing developments showed that fewer cars were owned by residents, so restricted income was included as one of the conditions in the parking ratio standards. Arlington County is also doing an extensive review of their parking standards for proposed development in the Rosslyn Ballston and Jefferson Davis metro corridors.

These are just a few of the land use strategies that can support cost efficiencies or reductions for affordable housing development. Other issues to consider are zoning restrictions on the type or intensity of development, permitting and site planning process, paperwork and fees. These can be costly and time-consuming activities that make development more expensive. While subsidy dollars will always be needed to develop affordable housing, those jurisdictions that promote cost savings through strategic use of their land use policies will be more successful in leveraging their local investments.