Development is picking up in the City of Alexandria, including new projects by nonprofit developers of affordable housing. Last year the City Council approved AHC’s St. James Plaza, and in December Alexandria Housing Development Corporation and Carpenter’s Shelter received approval to build a new shelter with 98 units of affordable housing on site. With new several development projects in the pipeline through 2021, the Office of Housing confirms an estimated $12 million shortfall to adequately fund those developments.

Now that Ramsey Homes has been approved for development, the Alexandria Redevelopment and Housing Authority is turning its attention to the next of five properties that are slated for redevelopment into mixed income communities. First up is Andrew Adkins, 90 units of public housing just two blocks from Braddock metro station.

Taking advantage of its location near transit, the redeveloped Andrew Adkins site will increase density with significantly more units of housing, but particular attention will be paid to how many units for households earning less than 30% of the area median income will be created at that site, and the duration of the affordability period. We expect to hear considerable discussion regarding interpretation of the City’s Resolution 830 affirming the one-for-one replacement of public housing units.

The disposition of surplus publicly-owned land will be the subject of a community meeting on Monday, Jan 9 at the City’s Durant Recreation Center.  If these sites are appropriate for residential development, some affordable housing should be required given the loss of affordable units and their priority for the City. Using public land to develop affordable housing is a best practice, and one of the earliest examples in our area is the Station at Potomac Yard. We encourage Alexandria activists to be forceful advocates for housing at this meeting. 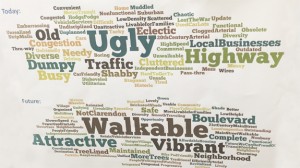 Arlington will continue the community planning process for the Lee Highway corridor in 2017, building upon extensive community meetings and input from last year that culminated in the Lee Highway Visioning Study. This process was a unique, joint effort between Arlington County and the Lee Highway Alliance (LHA) to achieve a vision that balanced a broad range of perspectives. LHA is a coalition of 18 civic association leaders who have actively engaged communities along Lee Highway since 2012 to develop a community-based vision, and identify actions and strategies to achieve it.

As a result of the threat to affordable garden apartments in the Westover neighborhood, residents in the community requested that the County review this area for designation as a local historic district. In November, the Historic and Landmark Review Board (HALRB) directed county staff to conduct an analysis of the garden apartments within this area as part of a historic designation review process. In an effort to stem the demolition of Westover’s older affordable housing stock, the Arlington County Board allocated $10.9 million in Affordable Housing Investment Funds to Arlington Partnership for Affordable Housing toward the purchase of 68 units there.

In 2017 Fairfax County will begin developing a Strategic Housing Plan to align with the County’s adopted Plan for Economic Success. In more than 250 community and business focus group meetings leading up to the adoption of the Plan for Economic Success, housing affordability was identified as one of the top three priorities for the participants. County staff anticipates presenting the final housing plan to the Board for their approval in early 2018.

In 2015, the Board of Supervisors adopted a comprehensive plan amendment for the Bailey’s Planning District which includes Seven Corners and Bailey’s Crossroads, but not much has happened since then. A follow-on motion which was also approved, created an Implementation Steering Committee and several inter-agency work groups to oversee execution of the recommendations for housing, transportation and public facilities. However at last check with the County, neither the Implementation Committee nor the work groups had been created. We will follow-up with new details as they become available.

Reston Town Center North is another County planning initiative which was begun in 2015, but seems to be stalled. Given its location and proximity to the future Reston Town Center metro station, it’s surprising that there has been no activity to advance redevelopment there.

One project that was completed was the final report from the Fairfax County Building Repositioning Workgroup. This group came together in 2015 to evaluate the impacts of the changing office market on existing office space and how the use of buildings changes over time. Approximately 19 million square feet of commercial office space in the County is either vacant or substantially underutilized, creating a significant loss of real estate tax revenue. The final report was adopted by the Board of Supervisors in October, and staff was directed to begin implementation of the recommendations. This report should be helpful to other jurisdictions in the region who are also struggling with the impacts of the changing office environment. As a next step, we encourage select regional organizations such as the Metropolitan Washington Council of Governments or the Housing Association of Nonprofit Developers in collaboration with their members, to expand the work of this report to develop recommendations  for how these assets could be repurposed for housing that’s affordable.