After more than a year of contentious public hearings and community meetings, Alexandria’s City Council voted unanimously for a new direction in the redevelopment of Ramsey Homes. At their last meeting before summer recess, Council directed city staff to focus their analysis and feasibility studies on a plan that includes demolition of all four existing buildings and construction of 52 new units of housing affordable to a mix of incomes.

The proposed new building is four stories tall and will include 52 one, two and 3-bedroom units with 30 underground parking spaces.  With the demolition of the current units, this option will provide considerably more ground level open space than the original proposal. 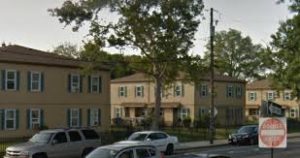 This surprise turn of events at the eleventh hour was triggered by a lengthy discussion of the substantial costs related to the preservation of one of the Ramsey buildings. Housing advocates had urged the Council well in advance of this meeting not to use scarce housing funds for a costly historic preservation of this property. In addition, several current Ramsey residents expressed real distain for retaining any of the original buildings and stated they would not be interested in living in the restored housing. Councilman Willie Bailey spoke eloquently from the dais about the tremendous loss of affordable housing in the City. He stated that the majority of African Americans in the city could care less about preserving segregated housing. They feel priced out of the City and want safe, decent housing that’s affordable for their families.

What happens next? The City – ARHA Redevelopment Work Group will meet throughout the summer, and staff will continue reviewing costs and examining infrastructure requirements as well as refining the scope of work and design for the project. The Parker Gray Board of Architectural Review will meet on the proposal in July, and it is anticipated that ARHA will be back before City Council by year’s end for approval of the development.